Create an Account - Increase your productivity, customize your experience, and engage in information you care about.

The earliest inhabitants of the Pittsburg/Camp County area were the Caddo Indians, who lived here 1,000 years before the arrival of settlers. In the 1830s, pioneers began arriving in Northeast Texas and by 1850, many families from Georgia, Tennessee, and Alabama were living in what was then Upshur County.

W. H. Pitts came to Texas in 1854, and the following year settled on a tract of land, most of which is now comprised within the corporate limits of the town bearing his name. "Major" Pitts, as he is now called, was then a young, vigorous man full of hope. He came to Texas to make his home. His first move was to secure title to enough land to begin a farm, and immediately upon locating land, he bought a tract of 200 acres, put up his primitive log cabin and started a "clearing."

The Creation of Pittsburg

Growing as the county grew, his original patch in the woods spread out until he was the owner of many acres and a large and prosperous farmer. The town of Pittsburg sprang up, starting, as most country towns, a mere crossroads place, but grew in importance until a regularly laid out settlement with a name became necessary. And taking the name from a prominent settler, it became Pittsburg.

It was 22 miles to the county seat of Gilmer. When the creeks would flood it would be weeks before citizens could travel to the courthouse to take care of legal matters. Thus in 1874, the citizens of Pittsburg asked the state legislature to form a new county. This new county was named for John Lafayette Camp (1828 to 1891) who was a soldier, lawyer, statesman, a member of the Constitutional Convention of 1866, and a State Senator in 1874.

Pittsburg was home to the first Carnegie Library in the State of Texas. The library building served several needs as well as a library. The City offices were in this building as was an auditorium where performances and concerts were regularly scheduled.

In 1909, the Northeast Texas Livestock and Agricultural Fair was organized. During its heyday, this fair was second in size to the State Fair of Texas in Dallas. Excursion trains ran from Tyler, Texarkana, and Greenville, bringing visitors to the fair. The first parachute jump from an airplane is said to have been at the Northeast Texas Fair.

Pictured is a 1/3 replica of the Ezekiel Airship that flew a year before the Wright Brothers' airship. 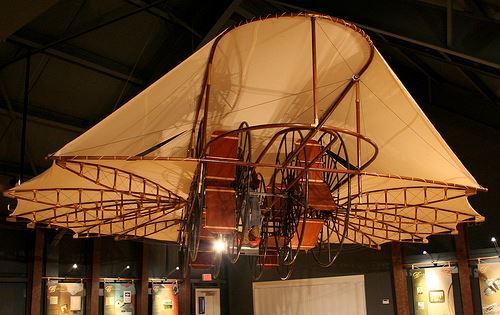